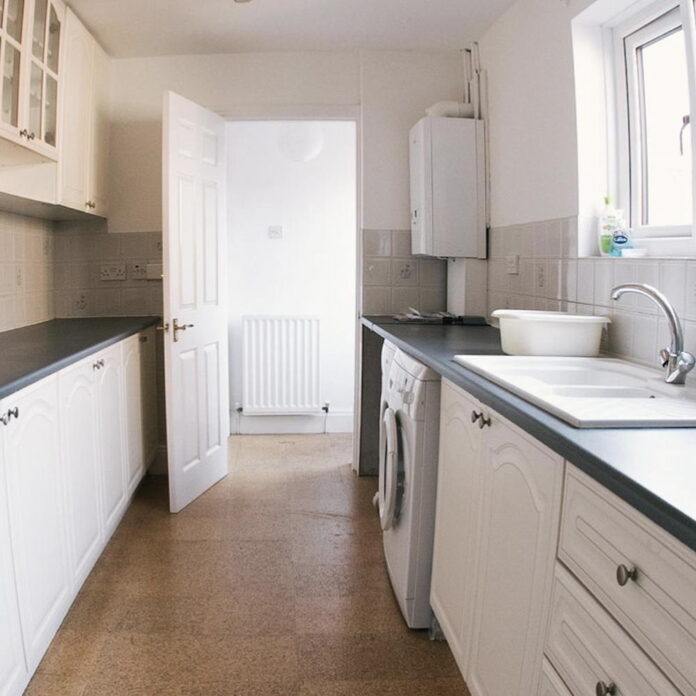 We often talk about the benefits of using paint to revamp your home, but one couple have taken it to a whole new level. Their black kitchen makeover has not only transformed a dated room, but it’s given Ryan and Jo from Newcastle upon Tyne the chance to express themselves artistically.

Having taken on a Victorian flat that needed plenty of work the couple have been making the place their own with quirky designs and creative choices. Turning their drab kitchen into a wacky masterpiece is just the start!

A dated design was fairly bland, devoid of colour and had unsightly pipes and the boiler on show.

The couple were keen to change every aspect of the kitchen, from the cabinetry doors and old oven to the worktops and flooring, without spending a fortune. What better way to give it a new look on a budget than with some simple upcycling and daring paint colours?

Ready to see how you can use small kitchen paint colours for a big improvement? We think you’ll agree this makeover is pretty impressive…

Can you believe this is the same kitchen? It’s a fine example of how painting kitchen cabinets can be totally transformative.

The new cool and quirky kitchen is miles away from the previously drab design and the couple haven’t been afraid to experiment. ‘Our style is atmospheric and artistic,’ says Ryan. ‘We’ve worked to find a nice balance between modern and classic by bringing back some of the flat’s original features, while also experimenting with weird and different designs when it comes to decorating.’

For this black kitchen makeover the couple have created different paint effects for an artistic look, from the dramatic black walls and cabinets to the rust-coloured ceiling.

The boiler and pipes have been boxed in, the worktops changed and even the radiator has been painted in the same striking black.

We love how they’ve taken the rust colour down from the ceiling to the top part of the room, and you can just see how it cuts into the door frame, giving it the look of a torn page.

‘On the subject of paint, it’s surprising how much of a difference you can create just by freshening up your home with some new colours,’ says Ryan. ‘Not just walls either! Doors, door frames, stairs, bannisters, radiators and wooden floors. And of course, you can do that yourself which means cutting the cost of labour.’

On one wall, Jo and Ryan even tried a ‘crack effect’ – something they’ve experimented with multiple times whilst painting.

‘We came up with an idea to mimic that look by actually cracking the new tiles for the kitchen,’ says Ryan. ‘We were 50/50 on whether it would flow and have a continuous cracked look. It turned out easier than expected with only a few wasted tiles! We’re glad we did it as it looks great and it’s something we haven’t seen before in someone else’s house.’

We think this would make a pretty cool kitchen splashback idea!

Wall units have been swapped for open shelving, displaying crockery and quirky pieces, that add to the eclectic feel of the kitchen. ‘We’re always on the hunt for bargains, whether it be online or in salvage shops and even back lanes,’ Ryan says.

‘It’s a D.I.Y renovation, so we cut huge amount of labour costs by doing the majority of the work ourselves,’ Ryan told designer paint brand Lick. ‘Some people like to argue that you won’t get the same result as using professionals but, at the end of the day, what’s the fun in that?’

‘If you’re thinking of experimenting, just try it . You’ll create your own style and feel a real sense of achievement.’ We couldn’t agree more.

Check out more of Ryan and Jo’s home makeovers on Instagram @anotherfknflat.

The post See how a drab cream kitchen was transformed by painting the cabinets black appeared first on Ideal Home.