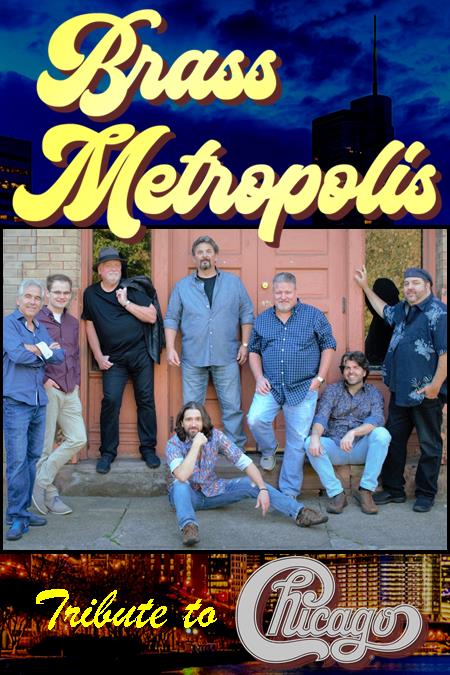 CHICAGO is one of the longest-running and best-selling bands of all time. Since their first release in 1969, they have sold over 100 million records! The iconic group had five consecutive number-one albums and 20 top-ten singles. In 1974, Chicago had seven albums, its entire catalog at the time, on the Billboard top 200 simultaneously. The group collected 21 top 10 singles, 5 consecutive number one albums, 11 number one singles, and 5 gold singles.

Brass Metropolis is an eight-piece band that embodies all the excitement, artistry, and virtuosity of the early Chicago Transit Authority (Chicago’s early band name), and their song list that ranges from Introduction to You’re the Inspiration. The band gives a performance that exemplifies the diverse elements that made Chicago extraordinary: the interplay between Terry Kath and Peter Cetera, intricate vocal arrangements, a phenomenal horn section, and a virtuosic rhythm section. If you wish you could have seen Chicago in the 1970s, you will love Brass Metropolis.

The band is widely known all over the region, having performed at concerts and festivals that draw thousands of fans, including Rockin’ on the River, Northeastern Ohio’s longest-running outdoor concert series (pictured above)!

From the intricate harmonies to the amazing brass arrangements, to the distinctive melodies and faithfully recreated sounds of one of the most iconic bands in the world, you will thoroughly enjoy Brass Metropolis!