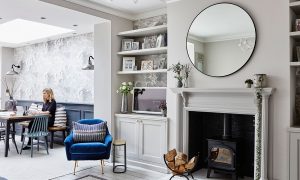 When they were given the keys to their future home, a Victorian terrace house in North Dulwich, this happy duo felt especially lucky. With several other buyers vying for interest, the sale had gone down to sealed bids. ‘The house hadn’t been touched and you don’t find many properties like that in the area so there were lots of people competing. It was all a bit tense but we were thrilled when we found out that our offer had been accepted’, says the homeowner, who has just set up her own interior design firm (emmamastersinteriors.com).

The couple, who have a six-year-old son, were only in possession of the keys a few short hours before handing them straight over to the builders. ‘Because it was a probate sale there were several months before taking ownership and that gave me the time to plan, get quotes and create job lists,’ recalls the homeowner.

Despite the accumulation of many years’ worth of furniture and decay, the couple could see the potential. ‘Our motivations for moving were for more space and to get into a better catchment area for schools. We knew fairly quickly that we wanted to buy the house. The rooms had a really nice sense of proportion and character so we made an offer at the end of the viewing,’ she says.

After handing the house over to the builders in May and renting nearby, it wasn’t until December that the family finally moved in. After such an epic overhaul of their home, the family are keen now to slow down the pace and relax. ‘Thankfully we bit the bullet and re-landscaped the garden at the same time as the builders were here so now we’re just determined to enjoy the fruits of our labours.’

Underneath several layers of carpet, the couple discovered the well preserved Victorian tiles which were later cleaned.

‘According to the neighbours, the house had always been owned by the same family. The builders found all sorts of relics from the past including a book of buttons from 1917 that had been stuffed up the chimney. We think the owner had put it up there to stop the draft. He’d also added layers and layers of carpets over the years under which were floorboards and tiles in fantastic condition,’ they note.

A wallpaper backdrop unites this scheme with moderating grey tones providing a sense of depth. Original floorboards have been repainted in a tonal grey to continue the sense of flow and calm.

‘I’m not one for a huge amount of colour so I opted for a tight, neutral base adding blue accents with accessories and artwork,’ says the homeowner of the grey living room idea. ‘Ebay was a brilliant resource for us. We bought lots of furniture which we then reupholstered. We also found lovely accessories, like a set of Georgian door handles that were in keeping with the house. The two wallpaper prints also bring a characterful cohesion.’

The low horizontal profile of this sofa pairs well with the picture shelf display of art.

Small scale mid-century style chairs ensure the doorway is unobstructed while the blue accent of the painting animates the scheme.

The low horizontal profile of this sofa pairs well with the picture shelf display of art.

The couple’s intense overhaul of the house involved a new full width kitchen-dining area built out 4.5 metres from the original house. The old galley kitchen was turned into a utility room design and downstairs cloakroom.

Pale hardwearing porcelain tiles bring a lighter feel to this north facing space. Industrial touches in the pendant lights and bar stools tie in with the steel framed windows.

Industrial wall lights are mixed with a more traditional wall panelling idea for a fresh updated look. Chairs from an antique market were repainted to fit into the colour scheme.

Upstairs the family bathroom was enlarged and, above that, a loft conversion with two bedrooms and a bathroom were added. New windows, roof tiles and the renovation of the front door gave the property a curb side facelift.

The homeowners moved the wall slightly to allow space for both a tub and generous shower. The grey veins of the marble gently unite the scheme.

Rather than hang art, the bedroom wallpaper idea lends drama to the scheme. The low headboard ensures it gets maximum impact. The warm woody tones of antique furniture punctuate this neutral scheme.

An accent wall with glow in the dark stickers brings a magical feel after dark for this kid’s room idea. The monochromatic scheme will work well as Alfie gets older. Wall stickers lend both colour and an educational element to the neutral walls.

A dark accent wall provides a sense of depth with a simple geometric print offering a focal point, bringing the same monochromatic sense of continuity as seen throughout the house. A dressing table-cum-workspace is a versatile addition.

The post A grey colour palette and striking wallpapers give this restored Victorian terrace a stylish new identity appeared first on Ideal Home.